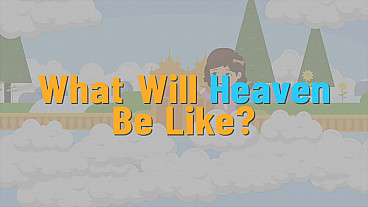 Heaven will be amazing.

A book of jokes and riddles.

"And they can no longer die; for they are like the angels. They are God's children, since they are children of the resurrection." Luke 20:36 (NIV)

Say: You know what a riddle is, don't you? It is a word puzzle -- a question that makes you think. Sometimes riddles are funny. I'm sure you have probably heard this one. "Why did the chicken cross the road?" The answer is, "To get to the other side." Here are a few of my favorite riddles.

Q: Mary's father has 4 children; three are named Nana, Nene, and Nini. What is the fourth child's name?

Q: What is full of holes but can still hold water?

Riddles have been around since the time of Jesus. Maybe longer than that. One day, Jesus was approached by a group of Sadducees — religious leaders who did not believe in the resurrection or the happiness of heaven.

The Sadducees were trying to trick Jesus into agreeing that there was no resurrection. They asked him to answer this riddle: "The law of Moses says that if a man dies, leaving a wife but no children, his brother should marry the widow and have a child who will carry on the brother’s name. Well, suppose there were seven brothers. The oldest one married and then died without children. So the second brother married the widow, but he also died. Then the third brother married her. This continued until all seven brothers had married the same woman. Finally, the woman also died. So tell us, whose wife will she be after the resurrection since all seven were married to her!"

My, that is a tricky riddle, isn't it? Listen to Jesus' answer.

Jesus said, "Marriage is for people here on earth. But in the age to come, those who are raised from the dead will not marry or be married. Not only that, but they will never die again. They will live forever as the children of God."

After Jesus answered their riddle so wisely, no one dared to ask him any more questions.

Now, you and I know that Jesus promised us that if we love him and trust in him, we will live forever in heaven with him. Isn't it sad that some people do not believe there is a resurrection and eternal life in heaven? Oh, that reminds me of one more riddle!

Q. Why were the people in today's Bible lesson called Sadducees?

A. Since they didn’t believe in the resurrection or the happiness of heaven, they were "Sad, you see!"

Pray: Dear Father, we are happy today that you have promised us eternal life in heaven. Thank you that heaven is going to be amazing! In Jesus’ name, amen.