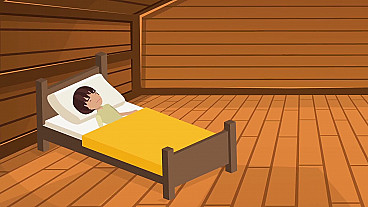 At the beginning of the school year, most teachers make a name tag for each student in the class. The teacher does that to help the students in the class learn one another's names. (Give each child a blank name tag and markers. Instruct kids to write their name on the nametag and decorate it. Have kids put them on and show them off.)

I’ve heard it said that the sweetest sound to anyone is the sound of their own name. Doesn't it make you feel good when someone remembers your name? (Invite kids to share about a time it made them feel good to hear someone say their names.)

Even God knows your name. Names are important to Him. In fact, I can think of several times in the Bible when God called someone by name. In Exodus, God called to Moses from within the burning bush. In Luke, Jesus called Zacchaeus' name, telling him to come down from the tree. God called Paul by his given name, Saul, before Saul became a believer, and then gave him a new name.

One of my favorite times in the Bible is when God called Samuel by name.  (Give each child another name tag and a pen this time, and have kids write “Samuel” on it, leaving space for a few small drawings.)

Samuel's mother, Hannah, wanted a son more than anything, so she prayed and asked God to give her one. (On the nametags, have kids draw a stick figure on her knees to represent Hannah praying.) Hannah promised God that if He would give her a son, she would give Him back to the LORD to serve him all the days of his life. God gave Hannah the son she asked for and she kept her promise to God. When the boy was old enough, she took him to the temple and presented him to Eli, the priest. So Samuel served in the temple under Eli. (Have kids draw a small temple to show the son would be serving God.)

One night Samuel was sleeping when he heard someone call his name. He got up and ran to Eli. "Here I am; you called me," he said to Eli.

Again the LORD called, "Samuel!" Samuel jumped out of bed and went to Eli. "Here I am; you called me."

"I didn't call you, go back to bed," Eli answered a second time.

A third time God called Samuel and Samuel got up and went to Eli. "Here I am; you called me," he said.

Finally, Eli realized that it was God who was calling Samuel. He told Samuel, "Go and lie down, and if He calls you again, say, 'Speak Lord, for your servant is listening."

Samuel went back to bed and sure enough, again he heard the voice of God calling, "Samuel! Samuel!" This time Samuel answered as Eli had told him, "Speak, for your servant is listening."

Some people think that God only calls grown-ups. But Samuel was just a young boy when God called him. God knows your name just as He knew the name of Samuel and God still calls boys and girls today saying, "Come, follow me." So, listen for God's call and answer just as Samuel did, "Here I am!" (Invite kids to stick their Samuel name tags upside-down to a leg so when they look down, they can remember that God called Samuel and God calls them, too.)

Dear God, today we are listening for Your call. Perhaps You have something special for us to do. When You call, we will answer, "Here I am." In Jesus’ name, amen.