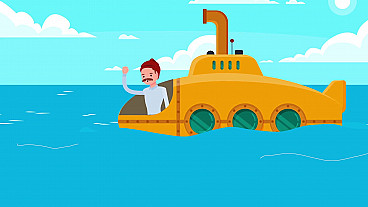 We can’t hide from God.

A blue tarp; tuna fish in a plastic container with a lid; a spray bottle filled with water

Have any of you heard about a man named Jonah? (Let the children respond.)

Jonah was a prophet of God; he would listen to God and tell the people what God said. One day, God said to Jonah, "Go to the city of Nineveh and tell the people who live there that they are a very wicked people and that they need to change their ways." Jonah did not want to go to Nineveh. (Invite the children to respond with a "NO!")

He didn’t like the people in that city, and maybe he was afraid of them. So Jonah decided to run away and hide from God. (Have kids pat their legs quickly to make a fast running sound.) He caught the first ship out of town and headed in the opposite direction from where God told him to go. (Have kids pretend to row.)

Jonah learned a very important lesson that day. He learned that you might run from God, but you cannot hide. Jonah got on that ship and hid way down deep inside. "Surely God won't find me here," Jonah thought. (Invite children to curl up in a ball and try to hide.)

But God sent a big storm and tossed that boat around so much that the other sailors thought they were going to drown. (Lightly spray children with water.) They found Jonah in the bottom of the ship and asked him, "Who are you and what are you doing here?"

Jonah answered, "I am a worshiper of the God of heaven, who made the land and the sea." Jonah told the sailors that he was running from God because he didn't want to go to Nineveh as God had told him to do.

When the sailors learned that Jonah was running from God, they were even more afraid. "What should we do to stop this terrible storm?" the sailors asked.

"Throw me overboard into the sea," Jonah answered, "and the sea will become calm." The sailors picked up Jonah and threw him into the sea and the storm stopped at once. (Lightly spray children with water.)

Did Jonah drown in the sea? No! God sent a great fish to swallow Jonah, and he was inside the fish for three days and three nights. (Gather children underneath a large blue tarp. Open the tuna fish and pass it around so kids can smell it.)

Spending all that time inside the great fish gave Jonah plenty of time to think. He prayed to the Lord from inside the fish. He confessed that he had been wrong to run from the Lord and promised to fulfill his promises to God.

God caused the fish to spit Jonah out onto the shore. (Have kids help throw the blue tarp backward off of them.) Then the Lord spoke to Jonah again and said, "Get up and go to Nineveh and deliver the message that I have given you."

This time Jonah obeyed the Lord's command and went to Nineveh. (Invite kids to respond with a “YES SIR!”)

Just as God had something for Jonah to do, he has a plan for you and me. I hope we will learn a lesson from Jonah. When it comes to doing what God wants us to do, we might run, but we cannot hide from God!

God, we know can’t hide from You. You know what we do and what we think. Give us the strength and courage to do all the things that You want us to do. In Jesus' name, amen.