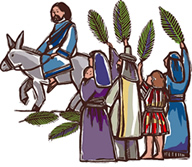 A bucket full of rocks and stones

Jesus was walking with his disciples toward Jerusalem. When they approached Bethphage and Bethany, near the Mount of Olives, he called two of his disciples to him and said, "Go into the next village where you will find a young donkey. Bring it to me. If anyone asks why you are taking the donkey, just tell them, 'The Lord needs it.'"

The disciples did as they were told and brought the young donkey to Jesus. They threw their garments over it so that Jesus could ride on him.

As he rode along, crowds were lining the streets and they began praising Jesus and shouting, "Blessed is the king who comes in the name of the Lord! Peace in heaven and glory in the highest!" They were creating quite a stir and some of the religious leaders didn't like it. They asked Jesus to keep his followers quiet. Jesus answered them and said, "If they remain silent, the stones would immediately begin to cry out!"

If these rocks would cry out this morning, I wonder what they would say? One might tell how a little shepherd boy named David used a small stone to slay a giant to show that we can do anything when God is with us!

Another might tell how the prophet Elijah used stones to build an altar to God. The altar was used to offer a sacrifice to God to prove that He is the one, true God.

This rock might tell how Solomon had used stones to build a beautiful temple for people to worship God.

Still another rock might remind us that Jesus once told a story about a wise man who built his house upon a rock. When the storms came, the house on the rock stood firm.

Yes, these stones might have a lot of stories to tell, but we won't let them. Just as the followers of Jesus lined the streets to praise their King, you and I are here today to praise our King. As long as we praise him, there will be no need for these stones to cry out.

Dear Lord, we know that you would rather hear us praise you than to hear a "rock concert." So Lord, we lift your name on high! Amen.