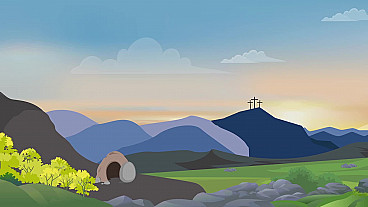 The Resurrection of Jesus

Jesus' Face Handout - one per child

Stare at the four dots in the center of this picture until I say stop. (Count to 30 slowly.) Now, close your eyes and wait for an image to appear. What did you see? Did you see an image of Jesus? Some people see the image of Jesus and some don't. It’s just like it is in real life. Some people don’t see Jesus because they’re looking for Him in the wrong places.

Have kids follow the motions to help tell what happened.

That is what happened in our Bible verses today. Early on Sunday morning, while it was still dark, Mary Magdalene went to the tomb where Jesus had been buried. (Walk in place.) She found that the stone was rolled away from the entrance. She ran (Run in place.) and found Simon Peter and another disciple, John. She told them, (Cup hands around mouth.) "They have taken the Lord’s body out of the tomb, and I don’t know where they have put Him!"

Peter and John started out for the tomb. (Run in place.) They were both running, but John outran Peter and reached the tomb first. He stooped and looked in and saw the linen wrappings lying there, but he didn’t go in. (Bend down.) Then Simon Peter arrived and went inside. He noticed the cloth that had covered Jesus’ head was folded up and lying apart from the other wrappings. Then John saw and believed (Put hands over heart.)  -- for until then, they still hadn’t understood the Scriptures that said Jesus must rise from the dead. Then they went home.

Mary stayed behind, weeping. (Pretend to cry.) As she knelt down and looked inside the tomb, she saw two angels dressed in white. (Kneel.) They asked her why she was crying. She told them she didn't know where they had taken Jesus. (Hold arms up like “I don’t know.”) Then, Mary turned and saw a man standing behind her. It was Jesus, but Mary did not recognize Him. She thought He was the gardener. Then Jesus called her by name and, when she heard His voice, she recognized Him. (Show a surprised face.) After she saw that it was Jesus, she went to the disciples and said to them, "I’ve just seen Jesus! He is alive!" (Jump up and down in excitement.)

Some people, like Mary, Peter, and John can’t see Jesus because they are looking for Him in a grave or on a cross. He isn’t there! He is risen and is seated at the right hand of His Father in heaven. If you want to see Jesus, look in His Word, He will reveal Himself to you, just as He did to Mary!

Dear God, we thank You that Jesus, our Savior, is not in a grave. He is alive! We serve a risen Savior! Hallelujah! In Jesus’ name, amen.