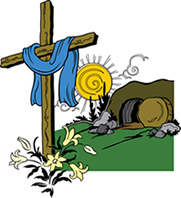 A toy Jack in the Box.

On the first day of the week, very early in the morning, the women took the spices they had prepared and went to the tomb. They found the stone rolled away from the tomb, but when they entered, they did not find the body of the Lord Jesus. Luke 24:1-3

(Start the sermon by slowly turning the handle on the Jack-in-the-Box. When Jack pops out, make a big production of it acting as if you were really surprised.)

Have you ever played with a Jack-in-the-Box? I'm sure you have. The Jack-in-the-Box has been around for hundreds of years and most children have either had one or played with one. When I was a child, the Jack-in-the-Box was one of my favorite toys. I can remember sitting and turning the handle, waiting for the moment when the lid would open and Jack would pop out. Even though I knew what was going to happen, I was always surprised, and perhaps even a little frightened, when Jack popped out of the box.

The Jack-in-the-Box reminds me of a story in the Bible -- a story about a very special surprise.

Early in the morning, on the Sunday after Jesus was crucified, two women went to the grave where Jesus had been buried. When they arrived, they found that the stone had been rolled away from the entrance and the grave was empty. They were surprised to find an empty grave and wondered what had happened to Jesus.

While they were wondering about this, suddenly, two men in dazzling bright clothes appeared to the two women. Now they were not only surprised -- they were also afraid. The men spoke to the women and said, "Why are you looking for the living among the dead? Jesus is not here, he has risen just as he told you he would."

When the women heard these words, they remembered that Jesus had told them that he would be crucified, but that he would rise again on the third day. Now they were no longer surprised at finding an empty grave. They rushed back to tell his disciples -- and everyone else what they had seen.

Some surprises, like playing with a Jack-in-the-Box, make us happy, but the best reason we have to be happy today is that the grave is empty, Jesus is alive, and he loves us very much! That is what we celebrate today!

Dear Father, we praise you! Jesus has risen -- just as he said he would! In Jesus' name we pray, amen.