There is Power in a Touch 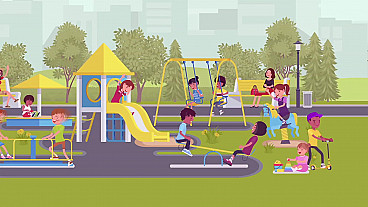 As you may know, we have five senses: sight, smell, hearing, taste, and touch. Each of these senses is very important to us. This morning we are going to test our sense of touch and discover the power that’s ours in the sense of touch.

(Gather the children in a circle.) I have a bag full of different objects. Everyone will close their eyes, and I’ll hand one of the objects to pass around the circle. Without looking, think about what the object is just by touching it.

(Have kids close their eyes, and then have them pass around one object.) I’ll count to 3, and you’ll shout out what you think the object is without opening your eyes. 1, 2, 3! (Pause.) Open your eyes. It’s a [name of object].

(Repeat the same process for each object. Invite kids to tell how they knew what each object was.)

The sense of touch is very important, isn't it? We can often tell what an object is by its size, shape, and texture -- all of which can be learned by using our sense of touch. In the Bible, Jesus showed His power through touch. We’ll hear about two ways He used touch to help people. Since Jesus is showing His power through touch, whenever I say the word, “touch,” you’ll say, “Power!” and do this motion. (Demonstrate for kids how to hold their palms up and facing outward, shaking them like “jazz hands.”)

One day Jesus was walking through a large crowd. The people were crowding around so that he could hardly move. There was a woman in the crowd who was not well; her body had been bleeding for 12 years. There wasn’t even a doctor who could help her. But she thought Jesus could heal her. She thought, "If I could just get close enough to touch (pause) his robe, I would be healed." So she pushed through the crowd and did it! And she was immediately better!

When the woman touched Jesus, He felt the power go out of Him. When He found out who touched (pause) Him, He said, "Your faith has healed you. Go in peace and be free from your suffering."

At this same time, Jesus was actually on His way to help a church leader whose daughter was very sick. After the woman had touched (pause) Him, He learned the girl had died. Then He told everyone, “Have faith!” and He made His way to the church leader’s home. When Jesus saw the people crying over the girl’s death, He told them she was only sleeping. This made them laugh, but He still went and touched (pause) her hand and said a prayer. And she got up!

The power in Jesus’ touch (pause) is amazing!