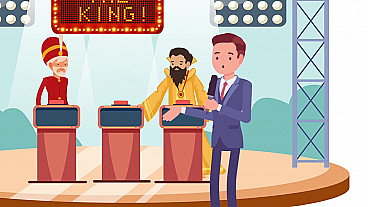 God looks at our hearts

Team sports equipment of your choosing

Sports can be fun! (Show off your equipment and briefly tell a few positive aspects of playing or watching the sport. Invite children to briefly share about sports that they like.)

In any team sport, the players must be chosen; so lots of times the kids who are the fastest, strongest, or best at a sport will be chosen first. What’s a talent a good baseball player would have? Soccer player? Football player? Hockey player? Basketball player?

For people who don’t have these talents, the part where players are chosen can be sad. We might be afraid we’ll be chosen last or not chosen at all. Our Bible passage kind of reminds me of the choosing part of sports. In 1 Samuel 16, God had decided to choose a new king for Israel. (Lead kids in pretending to put on a crown.) He told the prophet Samuel to go to Bethlehem to the house of Jesse. (Lead kids to pat their legs to make walking sounds.) God knew exactly who He was going to choose. So Samuel listened, (Have kids put a hand up to their ear.) and he told Jesse to bring his sons so that God could tell him which one He had chosen. Jesse brought in seven sons. (Lead kids in counting to 7.)

As each of Jesse's sons passed by, God told Samuel that he was not the one. Samuel could not understand it. They were all such handsome men and very strong. (Lead kids to make muscles.) Surely one of them was the king God had chosen. But God said to Samuel, "Don't consider his looks. I have rejected him. Man looks at outward appearance, but the LORD looks at the heart."

After seven of Jesse's sons had passed before him, there were no more sons in the house. So Samuel asked, "Are these all of the sons you have?"

It turns out, Jesse had a son who was still a boy, and he was taking care of the sheep. (Lead kids in saying, “Baa!”) Samuel had Jesse call this son in, and his  name was David. When David came in, God said, "He is the one.” (Lead kids in pretending to put on a crown.) So Samuel anointed him with oil.

He wasn't the oldest. He wasn't the tallest, and he wasn't the strongest. But God chose him to be king because God does not look just on the outside, but God looks at the heart.

Dear God, help us remember that You don't love us because of how big we are or what we look like. You love us and You look at our hearts. In Jesus’ name, amen.