A Bride for Isaac 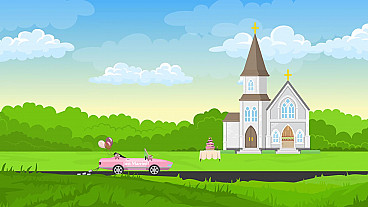 Has anyone here ever heard the story of Cinderella?  It is a beautiful fairy tale about poor Cinderella who went to a ball at the royal palace of the Prince. Cinderella was the most beautiful one at the ball and, when the Prince saw her, it was love at first sight. (Have all the kids go “AHHHH.”)

But then things took a turn for the worse. At midnight, Cinderella's beautiful dress turned back into her dirty work dress and she ran from the ball so that the prince would not see her. As she ran, one of her glass slippers came off and was left behind. (Have all the kids take off a shoe.) The Prince searched the entire country to find the one who could fit into that glass slipper. You know what happened! He found Cinderella and the slipper fit (Have all the kids put their shoe back on.) The Prince and Cinderella married and lived happily ever after. What a beautiful love story. (Invite all the kids to clap.)

You may remember that Isaac was the son of Abraham. When Isaac had grown up, it was time for him to get married. Abraham wanted Isaac to marry someone from his homeland, but he did not want Isaac to leave the place where they were living. So Abraham decided to send one of his servants to find a wife for Isaac and bring her back to him. (Have all the kids say,  “Go, find a wife!”)

The servant was happy to help his master, but he was not sure how he would know which girl was the right one for Isaac. He took 10 camels and lots of gifts for the new bride and began a long journey. As he walked, he prayed that God would help him to know how to find the right wife for Isaac. (Invite kids to make a walking sound on the floor with their feet or hands.)

When the servant reached Abraham's homeland, he saw a well. That gave him an idea! He prayed that God would send the girl who was to be Isaac's wife to the well to get water. The servant would ask her for a drink. If the girl gave him a drink and then offered to give a drink of water to his camels without even being asked, he would know she was the one that God wanted to be Isaac's wife. (Lead kids in making drinking noises.)

As the servant sat by the well, a girl came to the well. The servant asked her for a drink and she happily got him a drink. Then she looked around and saw his camels nearby and offered to give water to his camels, too! It happened exactly as he had asked of God!! (Have kids repeat “Hooray!” after you. )

The servant gave her beautiful jewelry. He asked her who her father was and asked if he and his camels could spend the night at her house. She took the servant back to her home where he met her brother Laban. When they learned that Abraham had sent the servant to find a wife for Isaac, and that the Lord had shown him that Rebekah was the special woman that God had chosen for Issac, they were so happy. (Ask kids to make their happiest face.)

They left the camels and gifts with Laban and headed for Isaac's home. When Rebekah saw Isaac in the distance, she was so excited. When Isaac saw Rebekah, it was love at first sight. They got married right away. And Isaac loved Rebekah very much! (Have kids all cheer in unison.)

Dear God, We are so thankful that you provide for our needs. Help us to trust you to give us what we need. In Jesus’ name, amen.