Do even more with Sermons4Kids Plus! You’ll get full Bible lessons for elementary and preschool kids with even better games, crafts, and Bible experiences. Unlock animated Bible lesson videos, instructional videos for teachers, beautiful handouts, and daily discussion questions for parents.

Sermon of the Week

Jesus Appears to the Disciples 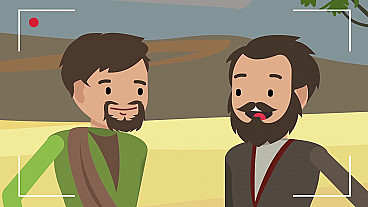 Jesus Appears to the Disciples.

Use the wood to make a pretend campfire.

I remember going on camping trips when I was young. One of my family’s favorite activities on those trips was sitting around a campfire at night and telling ghost stories. (Gather the children around the campfire, turn out the lights, and shine the flashlight on your face.) And as I listened, I told myself over and over, "There’s no such thing as a ghost." But that didn’t keep some of those stories from scaring the daylights out of me. I often found it hard to go to sleep later that night.

Now, that might seem like a strange way to begin a Bible lesson, but even in Bible times, some people believed in ghosts and were afraid of them. Listen to an example from the Bible.

It begins after two men had travelled on a long road, to a town called Emmaus. They talked about Jesus’ death and all that had happened. As they walked, they were joined by a man. They didn’t realize it at first, but it was Jesus! After Jesus revealed himself to them, they went straight back to Jerusalem and told Jesus’ disciples.

As they told the disciples they’d seen Jesus, He suddenly appeared among them! He said to them, "Peace be with you." Knowing He’d died, they thought He was a ghost! The Bible says that they were terrified and filled with fear.  (Have kids make their most terrified faces.)

So Jesus asked them,  "Why are you troubled, and why do doubts arise in your hearts? Look at my hands. Look at my feet. (Hold out your hands and feet like Jesus did).  You can see that it’s really me. Touch me and make sure that I am not a ghost, because ghosts don’t have bodies, as you see that I do."

Still the disciples weren’t sure what to think, so Jesus asked them for something to eat. As He ate some fish, they watched. And it showed them He wasn’t a ghost because a ghost doesn't need food.

The disciples realized Jesus had come back to life, and they spent the next month or so with Him. After Jesus returned back to heaven, those same disciples went all over the world, telling about Jesus’ crucifixion, His death, and His resurrection. They never stopped telling about what happened.

You and I have been called to tell others about Jesus, just like those disciples. We must be a witness for Jesus, too. We must tell the world that Jesus is alive.

God, we serve a risen Savior. He is alive! Help us to be witnesses of what He has done in our lives. In Jesus' name, amen.