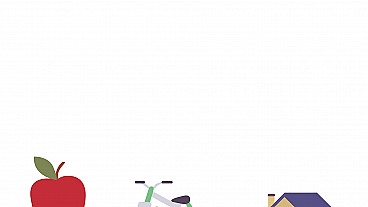 God provides for His children.

What if every morning you could open the front door and walk out into the yard and pick up your favorite food?  All of it you could eat! That would be great, wouldn't it?

We read in the Bible about a time when something almost exactly like that happened. God's people, the Israelites, had been held as prisoners in Egypt for many years. When they were finally freed and left Egypt, they were looking for the land that God had promised them. After they had been wandering around lost in the desert for a couple of months, the people started to grumble and complain against their leaders, Moses and his brother, Aaron.  (Invite kids to complain and grumble.)

"We had it better when we were in Egypt," they complained. "At least we had plenty to eat. God, You have brought us out here in the desert to starve us to death!"

God heard the people complaining and told Moses that in the evening He would send birds called quail to cover the camp so that the people would have meat to eat. Not only that, but in the morning, after the dew was gone, there would be manna on the ground for everyone to eat.  (Instruct those with popcorn to throw it in the air.) All they had to do was go out, pick it up, and eat it.

Why did God do this for those grumblers and complainers?  (Pause for responses.) He did it so that they would know that He loved them and that He would take care of them. God hadn't brought them out of Egypt to let them starve in the desert! God was going to see to it that they made it to the land which He had promised them.

Have kids pick up all the popcorn around them as though it’s manna.

Sometimes you and I grumble and complain, don't we? When do you complain? (Pause for responses.) We forget that God loves us and that He provides us with everything that we need. Instead of grumbling and complaining, we can say, "Thank You, God" and let’s do that right now!

Dear God, sometimes we grumble and complain. When we do, help us  remember that every good thing we have comes from You. In Jesus’ name, amen.