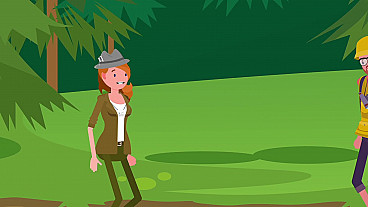 Jesus warns us to watch out for false leaders who will deceive us.

How many of you know how to play the game "Hana, Hana, Hana, Kuchi?" (Pause for responses.) It’s a Japanese game that is a little bit like a combination of "Simon Says" and "Follow the Leader."

Hana is the Japanese word for nose, and kuchi is the word for mouth. I will touch my nose three times as I say, "nose, nose, nose," but when I say "mouth," I will touch some other part of my body such as my ear, eye, or chin. You have to touch the part that I say -- not the part I touch. If you touch what I touch instead of what I say, you are out of the game. Let's try it once just for practice.

Uh-oh! I caught a few of you. Well, that was just for practice, so nobody is out of the game. Let's try it again.

I caught a few of you again, didn't I?

(Continue to play the game as time permits; then continue with the lesson.)

One day, Jesus told his disciples to be careful not to let anyone deceive them. He warned that there would be many false teachers who would come teaching in His name and claiming to be Him. Jesus said that many would be fooled.

It was fun trying to trick you in the game of "Hana, Hana, Hana, Kuchi," but it isn't any fun to see people tricked into following false teachers instead of following Jesus. It is important to know what Jesus really teaches in the Bible so we won’t be tricked.

Dear God, help us to read our Bibles each day and follow Jesus’ teachings. Guard us from those pretending to be Jesus. In Jesus' name, amen.