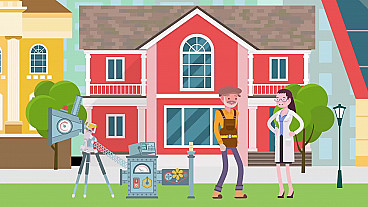 It isn't the size of the gift that matters.

Jesus called His disciples to Him and said, "This woman has given more than anyone. The others gave out of their wealth, but this woman gave all that she had."

You see, Jesus is more interested in what is in the heart of the giver than He is in the size of their gift.

I have a small coin purse. (Pour out the contents, have a child count it, and have the child tell how much there is.) That isn't very much money is it? But it can remind us of a little girl named Hattie and how her gift of 57 cents helped to build a great church.

One Sunday morning, the pastor of a church went outside to find a group of children who were unable to get inside for Sunday school because the building was too crowded. One of those children was six-year-old Hattie. When the pastor saw Hattie, he picked her up and carried her into the Sunday school class where he found her a seat. He told Hattie he hoped that some day the church would be able to build a building large enough for all the children.

Two years later, Hattie died, and the pastor preached at her funeral service. After the service, Hattie's mother handed the pastor a small purse containing 57 cents. She said Hattie had been saving her pennies to help the church build a new Sunday school building. The pastor took the 57 cents back to his church and told the people about Hattie. The people were so inspired by Hattie's gift that they gave faithfully until they built a wonderful, new building — big enough for all the children who wanted to attend.

I’m sure Jesus would say that Hattie gave more than anyone to build this great church. Her heart was pure and she gave all that she had.

Dear Father, everything we have is a gift from You. Help us to remember to give back to You with a cheerful heart.  In Jesus' name, amen.