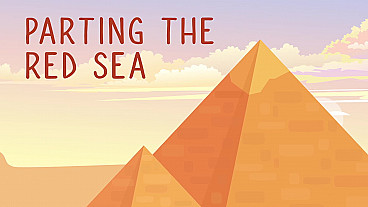 Our Bible lesson today is about one of the most spectacular events in the entire Bible. The Israelites had been slaves in Egypt for over 400 years. But Pharaoh refused to let God's people go until God sent 10 plagues to all of Egypt. After so many bad things happened, Pharaoh finally decided it was best to let the Israelites go.

The Israelites followed Moses out of Egypt.

Pour enough water on the plate to cover the bottom.

But Pharaoh changed his mind again. He sent his giant army to bring the Israelites back to Egypt. And the Israelites were caught between the army and the Red Sea. When God’s people saw the Egyptian army and chariots coming, they were afraid.

Shake pepper all over the water. Put your finger into the water and touch the bottom of the plate.

What happened? (Pause for a few responses.) You’re right; nothing happened! The pepper just stuck to my finger. Hmm. The Israelites were afraid that the Red Sea would cover them completely.

But Moses said, “Don’t be afraid. Just stand still and watch God save you today. The Egyptians you see today will never be seen again. The Lord Himself will fight for you. Just stay calm.”

Then Moses raised his hand over the sea, and God opened up a pathway through the water with a strong east wind.

Put a drop of dish soap on the tip of your finger. Then put your finger into the water again and touch the bottom of the plate. The pepper on top of the water will instantly spread apart.

The people of Israel walked right through the middle of the sea on dry ground, with walls of water on each side! The Egyptians, with their horses and chariots, followed the Israelites through the sea, but God twisted their chariot wheels, making them difficult to drive.

When the Israelites reached the other side of the water, God said to Moses, “Raise your hand over the sea again.” When Moses did, the water rushed back and all of the chariots and horses and the entire army of the Pharaoh were drowned. Not a single one survived.

When the people of Israel saw the mighty power God had unleashed against the Egyptians, they were filled with awe.

Imagine that—God caused the waters of the sea to separate. That’s kind of like our pepper trick, but on a giant scale. God is powerful and He protected His people, and He protects us, too.

God, thank You for saving the Israelites. Thank You for showing us in big ways and in small ways that You are powerful. Remind us that when we feel afraid or confused, You protect us. In Jesus’ name, amen.