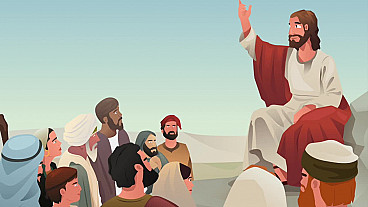 The Ascension of Christ

Helium balloons on a string - one per child

Hand each child a helium balloon, tying the string loosely to their wrist. Challenge them to hold their balloon down in their lap until they are given the cue “up, up and away.” Remind them of the importance of holding tightly to the balloon and listening for their cue to release their balloon.

I’m sure you know that when filled with helium, a balloon floats in the air. And it’s also quite enjoyable when it does float away from you. It’s fun to stand and watch as the balloon floats higher and higher into the heavens until it totally disappears. The only way to experience that is to be willing to let it go.

In today’s Bible lesson in the book of Acts, we learn that when Jesus was ready to return to heaven, He took His disciples aside to make sure that they understood everything that had happened to Him. He explained why it was important for Him to be crucified and to be raised from the dead to fulfill what the Scriptures had said about Him. He also told them that he was going to return to His Father in heaven and that the Holy Spirit would come to be with them.

(Remind kids to release their balloon.)

I don't know how all of this looked, but in my imagination I can see the disciples standing and watching as Jesus ascended higher and higher until He disappeared from view. Were the disciples sad? No way! The Bible tells us that when Jesus had gone up into heaven, the disciples worshipped Him and returned to Jerusalem with great joy. They stayed continually in the temple, praising God.

Dear God, thank You for sending Jesus, Your only Son, to die for our sin. We know that He has risen from the dead and has returned to heaven. Bless us today as we worship Him with great joy! In Jesus’ name, amen.